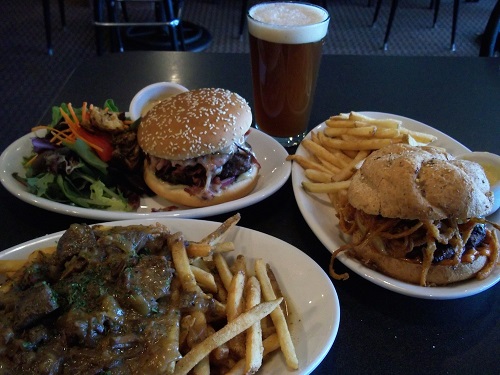 Full meals are quite reasonably priced, with prices ranging between $6 and $11. The burger is, without a doubt, the most popular selection here, and is made using sesame seed buns, Angus beef, garlic aioli, lettuce, red onions, and house-made pickles. The grilled cheese x3 priced at $6.25 is also another popular selection on the full meal menu. It is made up of swiss, cheddar, and fontina on wheat bread, with the option to add tomato, bacon, or any other toppings available for an extra $0.75. Other items offered on the full meal menu include the stack, ham on a pretzel, Reuben, seared cod over bean casserole, linguini marinara, as well as a variation of the linguini marinara with meatballs and grilled chicken for an extra $3.

It is always a joy to dine at Black Swan Brewpub in Plainfield because there is something for everybody. Therefore you are always guaranteed to find something that suits you and your crew. For instance, the sliders that are some of the most popular appetizers at the restaurant offer a selection for people who eat meat and vegetarians. The main meals are also designed to accommodate those who eat meat, as well as those who do not. The restaurant also offers a selection of items for kids, so you need not worry about letting your kid tag along because you are guaranteed that they will find something they like on the menu.

With the kind of beer selections that the Black Swan Brewpub in Plainfield has, you will be hard-pressed not to find something that fits you or your crew. Black Swan Brewpub in Plainfield has two main selling points. The first is the price–all items are reasonably priced, which is a desirable feature for those with a tight budget, or those planning for group expenditure. The second selling point is the quality of meals, drinks, and service. The meals offered at Black Swan are unique and delicious, while the beers are house-brewed and fresh. The staff is also quite friendly and ready to assist you when you need it.

All in all, Black Swan Brewpub in Plainfield is worth checking out if you are looking for a cozy hangout around the southwest Indianapolis area (right next door to Factual Data) that doesn’t break the bank.… 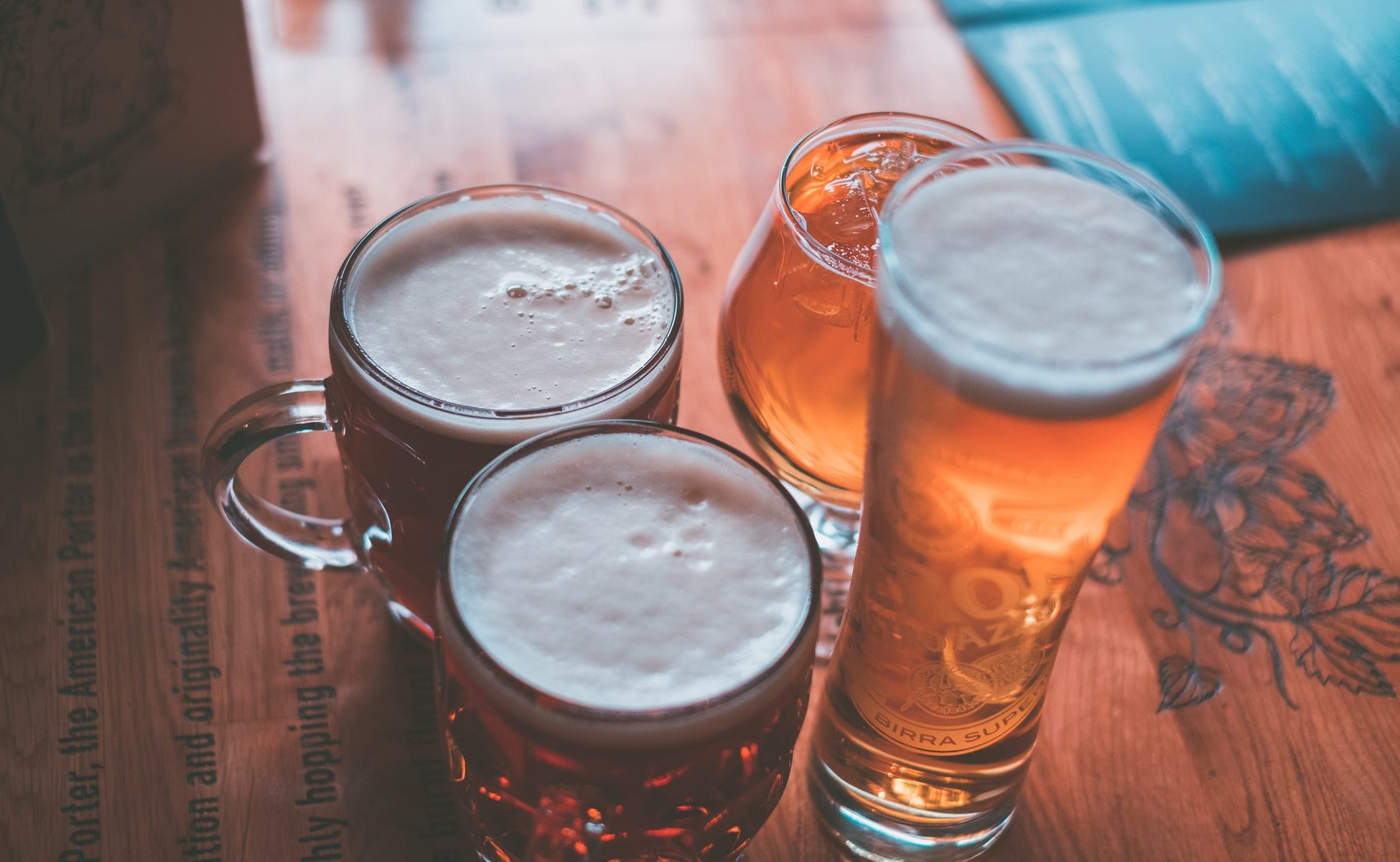 Brewpubs are usually known for one thing — beer — And rightly so, they are after all pubs that provide freshly brewed beer. However, the Black Swan Brewpub in Plainfield is famed for two things. The first is the freshly and brewed beer perfectly prepared by DJ McCallisters, providing a unique, bold flavor. The second is the delicious culinary delights created by Chef Nick Carter, which boasts freshness, homemade goodness, and creativity. To say that you will not find another meal in Southwest Indianapolis like the one Chef Nick Carter prepares at Black Swan Brewpub would be to state a fact. You literally will not find a similar meal in Southwest Indianapolis as far as uniqueness is concerned.

Black Swan Brewpub in Plainfield offers two beer lineups– the normal lineup and the rotational lineup. The normal lineup comprises cream and dry stout, Amber, Scottish, Potter, IPA, and Double Pale Ale. The restaurant keeps ten to twelve house beers in its 16 rotational taps, as well as a beer on its Angram beer machine, Wyders pear cider, and 2 guest beers from Indiana breweries. Some of the rotational beers include Belgians, Hefeweizen, Maple Oat Ales, milds, Rye IPA, Imperials, Oatmeal Stout, Wit, Old Ale, and Pale Ales. The Tettnanger IPA served is made quite well for the style, and the Maple oat Ale is surprisingly delicious given the hammering maple taste. However, the restaurant does not serve macro beers such as Coors, Bud, and Miller. Black Swan Brewpub’s well-brewed beers, coupled with the fact that they are reasonably priced, make the joint a favorite place to hang out for a couple of beers by locals.

The dishes in the restaurant’s menu are also quite good and reasonably priced. Sliders are one of the popular appetizers, and are priced at $6 and comprise 3 mini sandwiches of one kind. Sliders include buffalo chicken whose three ingredients are crispy buffalo chicken, garlic aioli, and blue cheese. Pulled pork consists of BBQ pork, house-made pickles, and garlic aioli. Chinese BBQ pork sliders consist of Asian slaw and hoisin. Smoke Portobello is specially designed for vegetarians and consists of garlic aioli, onion straws, and Munster. The mini burger consists of mustard, ketchup, and American cheese.

Fried pickles are another popular item on the list of appetizers. It goes for $ 5.50 and is made up of ranch dip and dill pickle spears. The restaurant also offers house fries for $4.75 and various tosses, including pepper sea salt, vinegar, parmesan salt, mixed herb truffle oil. Dips available include bacon aioli, honey-dijon sriracha aioli, sun-dried tomato aioli, as well as habanero ketchup. Other snacks and appetizers offered at Black Swan Brewpub include tots, pies, smothered fries, and grilled corn cakes. The smothered fries are priced at $6.50 and differ from the house-made fries in that they are served with beer gravy and cheese curds.…

If we were to add a third item to Benjamin Franklin’s famed two-item list of certainties (death and taxes), it would probably be that nothing beats a good meal followed by well-crafted beer at Black Swan Brewpub in Plainfield. Now I know what you’re thinking, but it’s not just the beer talking, Black Swan Brewpub really is quite something else. Located at 2067 East Hadley Road, Plainfield, the Black Swan Brewpub is a restaurant that offers a creative culinary experience, warm hospitality, and some of the best beers in southwest Indianapolis. The restaurant serves various pub dishes and other American fares in a casual environment. It is open Sundays through Thursdays from 11 am to 10 pm, and on Fridays and Saturdays from 11 am to 12 am. Black Swan brewpub makes its own beer, offering a rotating tap of its homemade beer and various wines and spirits at its bar. In addition to its full-service dining experience, take-out services are also available upon request. Some of the must-try items at Black Swan Brewpub include fried pickles and sliders for starters. For dinner, we recommend pasta or one of the house burgers. There is also a selection of meals for vegetarians, including the grilled cheese x three and dishes that are gluten-free such as the braised pork shank. In other words, you will be hard-pressed not to find something for your tastebuds once you walk in Black Swan Brewpub in Plainfield. So, whether you are looking for a spot to take your significant other, or catching up with friends, Black Swan Brewpub in Plainfield has something that will fit your needs.

Let’s start by talking about the setup. The Black Swan Brewpub in Plainfield is located in a single-storey building easily identifiable from the outside by the crimson design, olive green roofs, and conspicuous and minimalistic logo at the top. Just outside the Brewpub, there’s lots of space where you can park your car. So, when you visit Black Swan Brewpub in Plainfield, you don’t need to worry about driving around in circles looking for parking space. As you approach the Brewpub, you are drawn by the beautiful windows on the front side, which complements the exterior design’s crimson and olive green colors. What instantly grabs your attention when you walk in is the versatility incorporated in the interior design. The dining area features a mix of dark circular and rectangular bistro-style tables accompanied by sets of four chairs each. The corners feature pallet-designed lounging areas and eye-catching black and white wall hangings on top. The flour is in a dark walnut shade, which goes well with the dining and lounging areas’ overall design. The bar is simple, and precisely what you would expect from a Brewpub. It features a counter where the bartender places the drinks once they are ready. Different assortments of drinks are displayed on the other side of the counter, and a blackboard listing the drinks available when you walk in. When you spend your first five minutes at Black Swan Brewpub in Plainfield, you can quickly tell that the owners put in quite some thought by the overall design, and wanted to create a laid back and relaxing atmosphere for the customers. The outcome of this idea was as it were, your “home away from home.”…